Jerry Milani March 22, 2018 News, On The Air Comments Off on Professional Darts Finds A Numbers Home On BBC America 3,313 Views 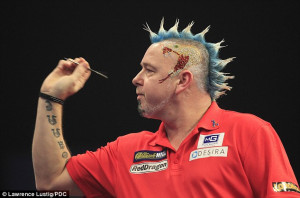 So is darts becoming the next poker? The numbers from the new home of the sport in the U.S., BBC America, seem to show that a niche sport, one that is wildly popular overseas, has over 16 million players in the U.S. and is as easy to explain to the general public as cornhole (another game that seems to have found a home) to be striking some bullseyes.

On Thursday BBC America shot around some info on exactly how many people have started to watch both on the channel at 10 p.m. on Thursdays (rebroadcast on the weekend) and are streaming the event live during the afternoon (a la March Madness).

Halfway through the Premier League season which draws sellout arena crowds and big numbers on SKY in the U.K. BBC America is reaching more than 1.3 million viewers a week on the linear network and online.

When you do the numbers, that’s more on some nights than mainstream sports programming on networks like  ESPNU, FS2, MLB Network, NBA-TV, and the NFL Network. Now a good amount of that programming may be taped, but there is a mix of spring training baseball, and most telling, college hoops and NBA basketball in the mix that gives the numbers more than a little legitimacy as a base. Heck, when you look at the millions of dollars and time spent trying to lure casual fans to watch Major League Soccer, the numbers darts, taped, darts, are drawing are almost halfway to MLS audiences which have taken over a quarter century to build…in just six weeks.

The push BBCA made to grab darts came after a solid showing for the World Darts Championship at the end of 2017, which dwarfed numbers on mainstream networks in the same timeslot and hit some high points the sport had never seen before in the States.

The broadcast itself, and we have watched, is still a bit of a mystery for those used to throwing in a local pub or a friends basement. There are some great personalities with massive social following like Rob Cross and Peter Wright, but the storytelling of these guys is still not there. However given the six week test balloon, it is pretty clear that there is an upside here, and that storytelling is key to keeping people who are not hard core darters (is that a thing?) coming back as the season moves towards its conclusion May 17 at the O2 Arena in London.

Darts, cornhole…finding and exploiting the niche becomes more intriguing; how about a niche sport decathlon!!

Jerry Milani is a freelance writer and public relations executive living in Bloomfield, N.J. He has worked in P.R. for more than 30 years in college and conference sports media relations, two agencies and for the International Fight League, a team-based mixed martial arts league, and now is the PR manager for FAN EXPO, which runs pop culture and celebrity conventions across North America. Milani is also the play-by-play announcer for Caldwell University football and basketball broadcasts. He is a proud graduate of Fordham University and when not attending a Yankees, Rams or Cougars game can be reached at Jerry (at) JerryMilani (dot) com.
@gbpackjerry
Previous Amazon Prime Video Announces ‘All or Nothing’ Global Sports Docuseries
Next ‘The Year of the Pitcher’ Highlighted In Book 50 Years Later