Jerry Milani May 2, 2018 News, On The Air Comments Off on Couture, Rutten Among PFL Broadcast Team 2,051 Views 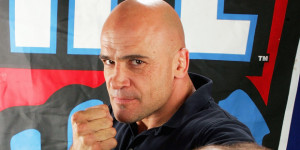 The Professional Fighters League (“PFL”) today announced its broadcast team for the 2018 PFL Inaugural season. The team, which consists of MMA legends, world-class athletes, and veteran sports broadcasters will provide in-depth analysis, play-by-play announcements, and fighter background stories and interviews that will engage both long-standing MMA fans and new fans tuning in for the first time. The broadcast team, which includes Randy Couture, Bas Rutten, Yves Edwards, Caroline Pearce and Todd Harris, will cover all PFL live events and pre- and post-event shows.

PFL events and fights will be streamed live and on demand on pflmma.com and the PFL apps, broadcast live in primetime on NBC Sports Network, and streamed live globally on Facebook Watch. The PFL 2018 Season debuts June 7th from Hulu Theater at Madison Square Garden and consists of 7 regular season events, 3 “win or go home” playoff events, and concludes with the $10 million PFL championship event on December 31st.PFL’s broadcast team will be there for it all—to break down the action and give fans expert analysis and new angles on the fights and the fighters.

“We have been highly selective in building our broadcast talent and I am thrilled with the production all- star team we have assembled in front and back of the camera,” said George Greenberg, Executive Producer of PFL. “Starting with our first event on June 7th and broadcast live on NBC Sports Network and Facebook Watch, our production style will be big, bold and daring as we seek to engage, excite and educate the viewers through each fight night. From our unique format to our entire on-air presentation, the PFL will truly re-imagine the MMA experience.”

“I am thrilled to be working with Bas again as well as bringing aboard my old buddy and fellow warrior Yves Edwards. And Todd and Caroline, with their unique energy and broadcast expertise will round out a great team,” said Randy Couture, MMA legend and PFL broadcaster. “The five of us are counting down the days to June 7th when the PFL launches its inaugural season.”

Todd Harris has covered the NBA Playoffs, the X Games, the Indianapolis 500, and the Olympics. He brings broad sports experience and a deep passion for MMA to the PFL.

Randy Couture is one of the most recognized faces in all of MMA. He is a former 2 division UFC champ and a UFC Hall of Famer (as well as action movie star). As a color commentator, Randy will draw on his own experience in the cage to provide insights into fighter strategy and technique.

Bas Rutten is a former UFC Heavyweight Champ and UFC Hall of Famer. He will conduct pre- and post-fight interviews, engaging fighter-to-fighter.

Yves Edwards is a former Pride and UFC Fighter with 60+ fights. He will provide deeper analysis of key moments in each fight, breaking down individual technique and strategy, and highlighting what makes the difference in the DECAGONTM.

Caroline Pearce is a former world-class British heptathlete and bobsledder who has covered MMA since 2013. She will lead pre- and post-fight interviews on Facebook Watch during PFL fight nights.

The first PFL event will be held on June 7th at Hulu Theater at Madison Square Garden and will be broadcast live on NBC Sports Network and Facebook Live. Prior to the bell, fans can learn more about the PFL, its broadcast team and the fighter roster and the personal stories of PFL fighters at PFLmma.com.

Jerry Milani is a freelance writer and public relations executive living in Bloomfield, N.J. He has worked in P.R. for more than 30 years in college and conference sports media relations, two agencies and for the International Fight League, a team-based mixed martial arts league, and now is the PR manager for FAN EXPO, which runs pop culture and celebrity conventions across North America. Milani is also the play-by-play announcer for Caldwell University football and basketball broadcasts. He is a proud graduate of Fordham University and when not attending a Yankees, Rams or Cougars game can be reached at Jerry (at) JerryMilani (dot) com.
@gbpackjerry
Previous Equestrian Lifestyle Network Now Available on Xfinity X1
Next 2018 International Champions Cup on ESPN