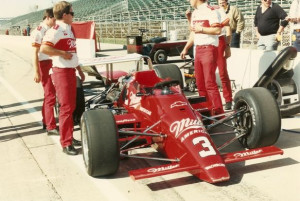 SiriusXM has announced that former open-wheel racing star Danny Sullivan, winner of the 1985 Indy 500 and 1988 CART Series champion, will host a new weekly show that will air nationwide on the Dan Patrick Radio channel on SiriusXM (channel 211).

The Real Spin with Danny Sullivan and Bill Armour will debut on October 15th and air every Monday (6:00-7:00 pm ET). Sullivan and Armour, a longtime journalist and racing insider, will cover the world of motorsports – including Formula 1, IndyCar, IMSA, Moto GP and more – and share their insights and discuss the trending topics from on and off the track.

The show takes its title from Sullivan’s famous 360-degree on-track spin towards the end of the 1985 Indy 500, when Sullivan deftly avoided a potential race-ending crash to go on to outrun Mario Andretti for the victory. The “Spin and Win” was a career-defining moment for Sullivan and has become a timeless highlight in motorsports history.

“I am very excited to get behind the mic and talk with SiriusXM’s listeners about the latest news and events in motorsports every Monday,” said Sullivan. “The Real Spin is going to cover it all in Formula 1, IndyCar and more, both on the track and off, and I look forward to working with Bill and SiriusXM.”

“Not only was Danny a star behind the wheel, he was ahead of his time when it came to reaching new fans and building the profile of drivers and their sport away from the track,” said Scott Greenstein, SiriusXM’s President and Chief Content Officer. “He has a fascinating perspective on what goes into being successful both on the track and off and we’re excited to give him a platform on SiriusXM to share his insight and experience. Our listeners will enjoy hearing Danny and Bill share their thoughts on the news from Formula 1, Indy Car and more each week.”

Sullivan’s career behind the wheel spanned two decades in which he competed in the CART Series (1982, 1984-1993, 1995), Formula 1 (1983), NASCAR (1994) and other events like 24 Hours of Le Mans. Sullivan’s racing career is highlighted by winning the 1985 Indy 500 and 1988 CART Series, and Sullivan is viewed as a pioneer off the track whose success marketing himself and promoting the world of auto racing to a wider audience set an example followed by generations of drivers who came after him.

Subscribers nationwide can listen to The Real Spin with Danny Sullivan and Bill Armour on the Dan Patrick Radio channel, which is available nationwide on SiriusXM radios (channel 211), on the SiriusXM app and at SiriusXM.com, and at home on a wide variety of connected devices, including smart TVs, Amazon Alexa devices, Apple TV, PlayStation, Roku, Sonos speakers and more. The show will also be available On Demand via the SiriusXM app and at SiriusXM.com.

Jerry Milani is a freelance writer and public relations executive living in Bloomfield, N.J. He has worked in P.R. for more than 30 years in college and conference sports media relations, two agencies and for the International Fight League, a team-based mixed martial arts league, and now is the PR manager for FAN EXPO, which runs pop culture and celebrity conventions across North America. Milani is also the play-by-play announcer for Caldwell University football and basketball broadcasts. He is a proud graduate of Fordham University and when not attending a Yankees, Rams or Cougars game can be reached at Jerry (at) JerryMilani (dot) com.
@gbpackjerry
Previous FloSports Bolsters Rugby Coverage
Next STATS Extends Sports News and Images Distribution Deal with AP