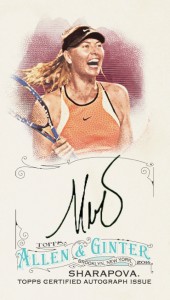 What do a tennis Grand Slam champion, an Olympic gold medalist, a boxing champion and a national champion football coach have in common?

Allen & Ginter trading cards feature an eclectic mix of subjects ranging from hand-painted renditions of historical figures to autographs from many past champions and pop culture icons.

This year’s set will feature a number of interesting celebrities including some of sport’s great champions. Here are few names that will be in 2016 Topps Allen & Ginter Baseball, which is schedule to come out on July 20:

Gennady Gennadyevich Golovkin – better known as Triple G – is the current unified WBA, IBF, IBO and interim WBC middleweight boxing champion. He is the top middleweight boxer in the world with a record of 34-0.

Maria Sharapova is a tennis star. The former number-one-ranked women’s tennis player in the world has won five Grand Slam titles and a silver medal in the 2012 Summer Olympics.

Steve Spurrier was a long-time college football coach, who only retired in 2015. He won the national championship in 1996. He is the first coach to win the Heisman Trophy (1966) and then to coach a Heisman winner.

Missy Franklin is a four-time Olympic gold medalist swimmer. At 17 years old, she won five Olympics medals during the 2012 Summer Olympics. Franklin looks to add to her total this summer in Rio de Janeiro.

Jerry Milani is a freelance writer and public relations executive living in Bloomfield, N.J. He has worked in P.R. for more than 30 years in college and conference sports media relations, two agencies and for the International Fight League, a team-based mixed martial arts league, and now is the PR manager for FAN EXPO, which runs pop culture and celebrity conventions across North America. Milani is also the play-by-play announcer for Caldwell University football and basketball broadcasts. He is a proud graduate of Fordham University and when not attending a Yankees, Rams or Cougars game can be reached at Jerry (at) JerryMilani (dot) com.
@gbpackjerry
Previous ESPN teams up with LISC to support new basketball courts in five local communities
Next The Basketball Tournament presented by Jack Link’s® Protein Snacks Announces Record $2 Million Prize and Sites