Ruth’s Early Years Get Deeper Look In ‘The Big Fella’ 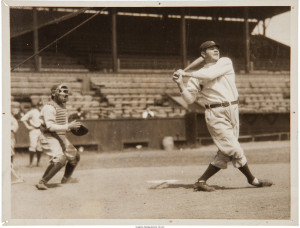 Myths die hard. Just as George Washington‘s false teeth weren’t wooden after all (the story is a bit nastier), common beliefs about Babe Ruth have persisted for decades. In the acclaimed The Big Fella: Babe Ruth and the World he Created (HarperCollins, 620pps, $32.50), Jane Leavy delves deeper into the Babe’s early life than ever before, revealing details of his broken home and subsequent time at St. Mary’s Industrial School in Baltimore.

A big part of what makes information about Ruth’s pre-baseball days so elusive is that he often gave contradictory facts, if any at all, about what Leavy shows was an exceedingly unhappy childhood. Basically abandoned at St. Mary’s by his father after separation from his mother, Ruth wasn’t an orphan, as he has been popularly characterized, but he did nothing to dispel that myth. And Brother Matthias, lauded for having taught Ruth the game and guided him through St. Mary’s, was later removed from the school, apparently for “keeping company early and late…” with a woman in Baltimore, after which time he was reassigned to a prep school in Massachusetts and removed from Ruth’s life.

One of the creators of the mythmaking machine was Christy Walsh, considered by many to be the first sports agent. Walsh, to the great benefit of his client and friend, negotiated and organized business deals, spokesperson opportunities and, notably, the 1927 postseason barnstorming tour that Ruth and his Yankees teammate Lou Gehrig embarked on after winning the World Series. The tour is the hook for The Big Fella, as Leavy weaves stories and details connected to or inspired by the places and events over the three weeks, which featured the “Bustin’ Babes” and “Larrupin’ Lous.” 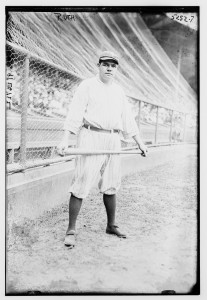 Walsh is as integral to Ruth’s life as anyone, save perhaps Claire Hodgson Ruth, his second wife. Walsh masterfully built the Ruth “brand,” a previously unheard of designation, and though the term wasn’t yet in use, Walsh helped the Bambino take advantage of his outsized celebrity and personality in almost every way, save his Yankees contract, which still was a mano-a-mano negotiation between player and owner. Walsh was responsible, according to research Leavy details, for nearly doubling Ruth’s earnings over and above his Yankees salaries. The Yankees’ deal in acquiring Ruth, Leavy repots, was so great, that the interest on the loan that Red Sox owner Harry Frazee took out as part of the sale repaid the original $100,000 purchase price after six years. As Leavy notes, “Talk about cursed.”

With a reporter’s eye for detail, Leavy utilizes dozens of current and past interviews, newly available documents and thorough storytelling. As she writes, “Like all the newfangled consumer gadgets then flooding the marketplace—radios, Victrolas, automatic clothes washers, vacuum cleaners, pop up toasters, do-it-yourself television kits—Ruth expanded notions of the possible.”

That’s what Ruth’s life was all about. Though it ended sadly, with baseball mostly abandoning its heretofore biggest star, who possibly saved the game, after his playing days were over, Ruth was bigger than life in every way. What The Big Fella does best is strip away the myths and gets at what is behind them. That doesn’t mean that all the common lore about the man is fake—heck, even some parts of the famously dreadful biopic The Babe Ruth Story have an element of truth to them. But in most cases there is a lot more to the story, and The Big Fella adds plenty to our knowledge of the man.

Jerry Milani is a freelance writer and public relations executive living in Bloomfield, N.J. He has worked in P.R. for more than 30 years in college and conference sports media relations, two agencies and for the International Fight League, a team-based mixed martial arts league, and now is the PR manager for FAN EXPO, which runs pop culture and celebrity conventions across North America. Milani is also the play-by-play announcer for Caldwell University football and basketball broadcasts. He is a proud graduate of Fordham University and when not attending a Yankees, Rams or Cougars game can be reached at Jerry (at) JerryMilani (dot) com.
@gbpackjerry
Previous Jackson’s ‘The Vet’ Featured In Standout Documentary
Next Andre Rison Holds Open Casting Call In Atlanta For Biopic