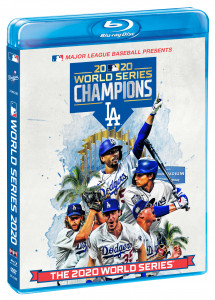 Like so many events, the COVID-19 pandemic dramatically reshaped how this MLB season looked and felt. After navigating unprecedented challenges, playing a restructured regular season, a new Postseason format and the first neutral site World Series in modern history, the historic 2020 season culminated in an unforgettable Fall Classic and with the Los Angeles Dodgers being crowned champions for the first time in since 1988.

Dodgers fans can rejoice and relive all the excitement, drama, and life-changing moments of the 2020 World Series® against the American League Champion Tampa Bay Rays, in the official 2020 World Series film from Major League Baseball. The documentary will be available in stores December 8, 2020 on a two-disc Blu-ray+DVD combo pack and DVD from Shout! Factory and Major League Baseball. It will also be available on the same date digitally, to own and rent from all major platforms.

Legendary Dodgers broadcaster Vin Scully lends his signature voice to “THE 2020 WORLD SERIES,” taking fans on a heartfelt journey to the 2020 championship through his unique baseball perspective. As the 1982 recipient of the Ford C. Frick Award, which enshrined him in the broadcasters’ wing of the Baseball Hall of Fame, Scully has covered many of baseball’s most thrilling moments, including Sandy Koufax’s four no-hitters, Hank Aaron’s 715th home run and Kirk Gibson’s dramatic home run in Game One of the 1988 World Series. He has voiced over the narration for seven previous World Series documentaries including in 1959 (Dodgers), 1963 (Dodgers), 1965 (Dodgers), 1979 (Pirates), 1980 (Phillies), 1981 (Dodgers) and 1986 (Mets).

“It was 32 years since the Dodgers won a World Series and the seventh in the history of the organization, bringing great joy to their fans and the city of Los Angeles in particular,” said Scully. “This is their winning story against the Tampa Bay Rays, and it’s an honor for me to recount just how they did it.”

With MLB playing in a Postseason bubble, media presence and access was limited. Producers of this year’s documentary utilized on-site crews with approved access as well as other feeds available to capture all the pulse-pounding action and emotion of the season. Expertly crafted from hundreds of hours of footage, the official World Series documentary gives fans a front row seat to this extraordinary championship run through highlights from the entire Postseason and in-depth interviews and exclusive bonus features including regular season highlights, clinching moments, featurettes and more.

Fans of the Dodgers will also be able to relive their team’s entire Fall Classic from the first pitch to the last out.

“2020 WORLD SERIES COLLECTOR’S EDITION: LOS ANGELES DODGERS,” a grand slam 8-disc set that includes all six complete games of the World Series plus NLDS Game 3 and NLCS Game 7, will be available on February 9, 2021.

Jerry Milani is a freelance writer and public relations executive living in Bloomfield, N.J. He has worked in P.R. for more than 30 years in college and conference sports media relations, two agencies and for the International Fight League, a team-based mixed martial arts league, and now is the PR manager for FAN EXPO, which runs pop culture and celebrity conventions across North America. Milani is also the play-by-play announcer for Caldwell University football and basketball broadcasts. He is a proud graduate of Fordham University and when not attending a Yankees, Rams or Cougars game can be reached at Jerry (at) JerryMilani (dot) com.
@gbpackjerry
Previous The Next Generation of NBA® 2K21 Now Available Worldwide
Next MSG Networks Announces New Weekday Morning Show, MSG A.M.