The Electronic Gaming Federation (EGF), the national governing body for formalized varsity-level collegiate D-I esports and high school level leagues, has wrapped its 2020-21 intercollegiate season and championships with record engagement across a growing number of games, setting the stage for what will be even further expansion on the college side this coming fall. EGF had over 70 colleges and universities, including the BIG EAST and the Metro Atlantic Athletic Conference en masse, participate in sanctioned season-long co-ed events for the first time, with St. John’s University (FIFA), UT Arlington (Rocket League and Overwatch) and Mississippi State University (Super Smash Brothers) winning national titles. Over 1,000 students participated in EGF events this past school year, up 30% from the initial season despite the campuses being closed for in-person due to the pandemic.

“This past season continued to give us new insight, learning and engagement into collegiate esports competition, and the result was a more engaged, more organized and more streamlined season than ever before,” said Eric Johnson, CEO of EGF. “We wish to thank the administrators, especially our conference partners like the BIG EAST and the MAAC, who developed programs to not just play through but to grow participation and recognition during these challenging times for all. They helped all of our student-athletes have a very cohesive national esports and gaming experience, with much more to come this fall.”

Demand for the EGF varsity model has continued to increase with colleges and high schools, with a record number of schools anticipated to be joining next season competition in an expanded format that will feature more game titles .

Jerry Milani is a freelance writer and public relations executive living in Bloomfield, N.J. He has worked in P.R. for more than 30 years in college and conference sports media relations, two agencies and for the International Fight League, a team-based mixed martial arts league, and now is the PR manager for FAN EXPO, which runs pop culture and celebrity conventions across North America. Milani is also the play-by-play announcer for Caldwell University football and basketball broadcasts. He is a proud graduate of Fordham University and when not attending a Yankees, Rams or Cougars game can be reached at Jerry (at) JerryMilani (dot) com.
@gbpackjerry
Previous Triller Signs Historic Broadcast Rights Deal with Sports League, Set to Air BIG3 in Exclusive Pact
Next World Chess HOF Debuts Food and Drink Exhibits 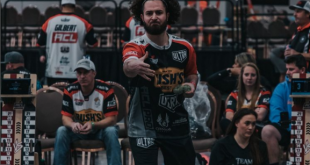